When Barnes & Noble released the nook in 2009, I thought it was a hilarious joke. Who the hell would want to carry around a light digital pad and forego the satisfaction of holding an actual weighty book with a colorful cover and crispy pages and that sweet paper smell?

Clearly I was wrong. So so SO super wrong. People LOVE reading on their little digital pads. It’s minimal. It’s easy. It’s affordable. It’s eco. I get it.

But I really like books. Luckily, I’m not alone. People still buy books! 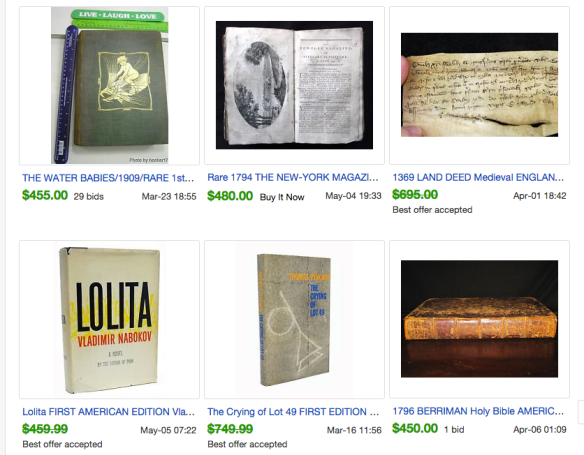 And they’re willing to throw down a nice sum of money for the rare goodies. When I visit thrift stores, I don’t stand for too long in the book section. I do a once over and see if anything catches my eye. This puppy caught my eye not long ago: 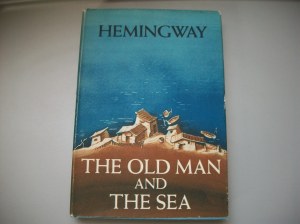 I peeked inside to make sure it wasn’t a dreaded book club edition as those can be tough to resell. Once I was in the clear with that, I took a gamble and bought the little guy without looking it up online. The worst case scenario is that it’s worthless and I have a new Hemingway book in my library and am out $1.25. Not a terrible situation.

….And then it sat on my bookshelf for almost a year b/c I forgot about it…funny how often that happens…

When I finally did get around to researching this gem for resale, I found that I had a first edition on my hands! Ideally with books, you’ll snag a first edition and first printing – sometimes noted as 1st/1st on eBay listings. It’s unclear whether my copy was a first printing, but I still made a buck off it.

Mine’s the one in the middle:

An easy peezy $177 was made. Not bad at all. This photo also illustrates how much listing details matter in netting a fair profit. The first photo is a well cropped close up and boasts “True First Printing” whereas mine is a little less confident in boasting the exact printing but the photo shows off the fair condition and the front and back of the book. And then we have that last one that didn’t even try – the photo looks cluttered and it’s not even right side up!

The lesson here is to always give a once over to the books in the thrift store. If it’s older, clean and not a book club edition, you can make a nice low stress profit. No extensive measurements to record, simple photos, and so easy and cheap to ship.